“While Jesus was having dinner at Levi’s house, many tax collectors and sinners were eating with him and his disciples, for there were many who followed him.” – Mark 2:15, NIV

When Jennifer was growing up, there was a new face at dinner almost every night. It was such a common practice in her house that the meals when it was just her and her parents stand out in her mind.

As a teenager, this habit embarrassed Jennifer. “My mom was the type of person who could strike up a conversation with the person in line behind her at the grocery store and two minutes later; they’d be chatting like they’d been friends for years!”

She once asked her mom about the strangers at the table. “Mom told me that’s what Jesus did. He was always inviting others to break bread with Him, so she figured that welcoming people to share a meal was the Gospel thing to do.”

When Jennifer heard that her mother had a heart attack, she rushed to her bedside.

“The doctor said it was a minor heart attack and that she’d make a full recovery. But we received dozens and dozens of casseroles, gifts, and help during that time. I never realized my mom’s impact until I saw how many people were eager to help her.”

God, help me to prioritize meal time. Show me how to be intentional and use it to connect with others. In Jesus’ name, Amen. 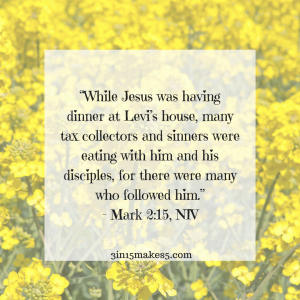