Then one of the synagogue leaders, named Jairus, came, and when he saw Jesus, he fell at his feet. He pleaded earnestly with him, “My little daughter is dying. Please come and put your hands on her so that she will be healed and live.”
—Mark 5:22-23

His precious daughter, a girl about twelve years old, was sick and dying. But Jairus knew if Jesus laid hands on his daughter, she would be cured.

So, Jairus came, a desperate father begging for his child’s life. Jesus agrees to go with this synagogue leader. But as they’re traveling, friends arrive to give Jairus the tidings.

His little girl has died. There’s been no miracle. The words twist in Jairus’ gut. A million emotions run through him, and he doesn’t know which to act on first. How could the light of his life be gone, just like that?

But before he can even reply to the news, Jesus whispers, “Don’t be afraid; just believe.”

When Jairus arrives, relatives have come. There’s a loud sound of weeping throughout their home. It’s the sound of those grieving for a life cut short.

Jesus sees the family and makes a bold claim, “Why all this commotion and wailing? The child is not dead but asleep.” (Mark 5:39)

The crowd laughs at Him, so Jesus has them removed. The only ones left are the girl, her parents, and his three disciples—Peter, James, and John. What happens next is amazing.

“He took her by the hand and said to her, “Talitha koum!” (which means ‘Little girl, I say to you, get up!’). Immediately the girl stood up and began to walk around (she was twelve years old). At this they were completely astonished.” (Mark 5:41-42)

When you’re in need of a miracle—when you need God to act—others may not believe. They may not grasp what God is about to do. But be patient and keep walking by faith, for the unbelief from others did not hinder Jesus’ plan from coming to pass.

God, I need a miracle. I can’t do this on my own. But I know that You have power and authority over everything in Heaven and on Earth. So I ask for a miracle. Help me to ignore those who don’t believe or don’t understand and instead focus on Your power. In Jesus’ name, Amen. 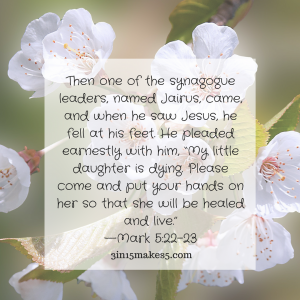