“Blessed are the peacemakers, for they will be called children of God.” – Matthew 5:9

Anger surged through Bill as he thought about his co-worker’s recent behavior. The other man had passed blame for an undone project onto Bill, and now Bill’s job was in question.

As he considered his response, he turned on his favorite podcast. He heard a pastor reciting Matthew 5:9. He quickly shut off the podcast, then said aloud, “God, I don’t want to be a peacemaker. I want to get even. I’m angry, and this isn’t fair.”

Instantly, Bill thought of Jesus on the Cross. “Okay, God,” he said softly. “That wasn’t fair either, and You used it for my good. Help me to be gracious with my co-worker. Give me peace as I do my job today.”

When Bill encountered his co-worker the next day, he gave the man a genuine smile and asked how he was. The other man sheepishly explained that he’d forgotten about the project and asked Bill’s forgiveness.

It’s hard to be a peacemaker when you want to defend yourself or get even with the person who wronged you. But as God’s child, you are called to walk in peace where possible.

Lord, help me to remember Matthew 5:9 when I encounter unfair situations. I want to be like Jesus and show mercy to the other person. In Jesus’ name, Amen. 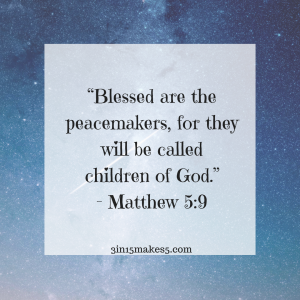