When a Samaritan woman came to draw water, Jesus said to her, “Will you give me a drink?” – John 4:7, NIV

It’s noon, and the sun is high in the sky. Jesus has been on His feet for hours already, and He’s tired. He sits down at the well and waits.

A few minutes later, a Samaritan woman appears. Jesus asks her for a drink, and she’s shocked. She’s used to most Jews looking down on her. When she confesses that she doesn’t have a husband, she waits again for rejection.

But it never comes.

As they continue to talk, she says, “I know the Messiah is coming.”

Of all the people He could have revealed His true identity to, Jesus chose a lowly Samaritan woman. Of all the tasks that Jesus could have been doing, He made time for a conversation with a lonely woman.

It’s right and good to accomplish a task when God commands it. But in today’s world, it’s easy to become task driven. You’re so focused on checking the next item off your to-do list that you miss people. They become numbers, figures on a spreadsheet.

Being a disciple of Christ means that sometimes we have to put down the to-do list and serve those in front of us.

Maybe that means pausing your grocery shopping long enough to offer help to someone in a wheelchair. Perhaps that looks like taking a homemade meal to a sick friend. It could also mean listening to your pre-teen share her latest drama, even though there’s a stack of dishes waiting in the sink.

Father, help me to be focused on loving and serving those around me. I confess sometimes I get wrapped up in my lists. Please put someone in my path this week that I could slow down and love on. In Jesus’ name, Amen. 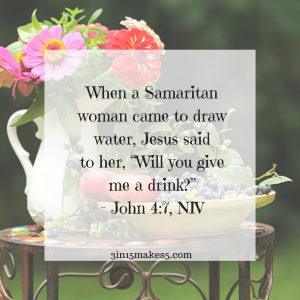