“He did what was right in the eyes of the Lord and followed completely the ways of his father David, not turning aside to the right or to the left.” – 2 Kings 22:2, NIV

Josiah was just eight years old when he began to rule in Jerusalem. His grandfather was King Manasseh, an evil man. Manasseh had idols set up in the Lord’s temple and encouraged the Israelite nation to worship these idols.

Josiah’s father was King Amon. Just like King Manasseh, Amon did evil. He routinely served the idols made by men’s hands.

After observing how his grandfather and father had lived, Josiah made a bold choice. He chose to serve God wholeheartedly during his reign as king. He would eventually have those idols destroyed and begin a reformation in Israel.

If anyone could have excused their bad behavior on their family lineage, it was Josiah. But Josiah didn’t walk in sinful ways. Instead, he traced his genealogy until he found King David and chose to become like him.

Sometimes, it can be tempting to believe that no one is watching how you live or cares what you do. But just like David would inspire later generations to seek God, you can do the same thing by being faithful to the Lord from right where you are.

God, when I’m tempted to think that my life isn’t influencing anyone, let me remember the story of Josiah. I want to be part of a generation that is faithful in Your sight. In Jesus’ name, Amen. 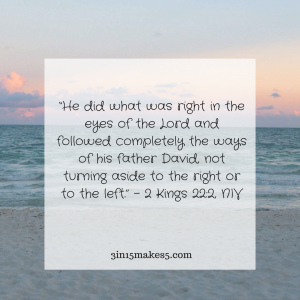