But Ruth replied, “Don’t urge me to leave you or to turn back from you. Where you go I will go, and where you stay I will stay. Your people will be my people and your God my God.” – Ruth 1:16, NIV

Naomi had suffered three horrible losses. She lost her husband, and both of her grown sons also died. Now, Naomi is a widow without a means of providing for herself or her two daughters-in-law.

“When Naomi heard in Moab that the Lord had come to the aid of his people by providing food for them, she and her daughters-in-law prepared to return home from there.” – Ruth 1:6, NIV

Naomi urges both daughters to leave her side and seek husbands since they’re still young. One daughter listens and tearfully departs. But Ruth promises to stand by her mother-in-law.

Most likely, Naomi had greatly influenced Ruth during their time together. The older woman was a shining example of faith and grace to the younger, resulting in her conversion.

Some days, it can be tempting to believe that you’re not influencing anyone. But Ruth’s bold confession shows that others are watching how you live. You can have a tremendous impact on the people living in your household by simply being faithful to God and relying on Him.

God, let me be a shining example of Your goodness and faithfulness within my own home. I want to impact my family and friends for Your Kingdom. In Jesus’ name, Amen. 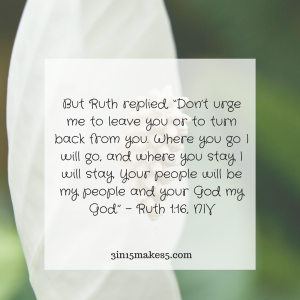