Immediately Jesus made the disciples get into the boat and go on ahead of him to the other side, while he dismissed the crowd. After he had dismissed them, he went up on a mountainside by himself to pray. – Matthew 14:22-23, NIV

Renee was passionate about helping others. She received the spiritual gift of mercy and found herself strongly identifying with those in pain. Because of her gift, she felt drawn to the medical field.

She became a nurse and began working in the pediatric unit of a big hospital. Renee’s job allowed her to quietly share her faith with hurting families. Sometimes, a parent would ask her to pray with them. Sometimes, she’d walk the halls whispering prayers over each family in the rooms.

But after several years on the job, Renee began feeling burned out. She had seen many children go on to make full recoveries and lead beautiful lives. But some of the children didn’t. Some of them grew worse and eventually passed away.

Renee struggled with these feelings. She’d felt called to serve families, so she didn’t understand what was happening. She asked the pastor of a local church why she was struggling.

“There’s a condition called compassion fatigue. It’s common for people who are gifted with mercy or are highly empathetic.” The pastor continued, “I tell my staff and others in caring professions to schedule time away. This is what Jesus often did in the New Testament. After feeding five thousand, he withdrew to the mountains. If Jesus needed space to process and decompress, so do we.”

Lord, I love serving others. I love pouring into them. But I also need the space and grace to deal with my own feelings. Help me to set aside time to retreat and pray. Show me when I need to set firm boundaries to guard my own heart. In Jesus’ name, Amen. 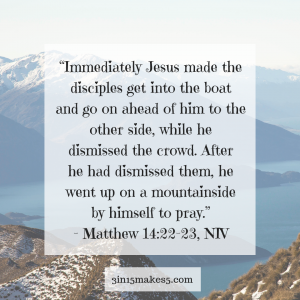