Jonathan said to David, “Go in peace, for we have sworn friendship with each other in the name of the Lord…” – 1 Samuel 20:42

Jonathan was the son of Saul, the first king of Israel. But God rejected Saul for his wickedness and decided to make David, a lowly shepherd boy, the next king of the nation.

If anyone had a reason to hate David, it was surely Jonathan. But he had no animosity toward the next king. Instead, he chose to love David, and the two young men became fast friends. When Jonathan could have betrayed David, he sent him away in peace.

You may one day face a similar trial. Your boss asks you for dirt about your co-worker or a leader in your church asks for gossip about another member. There are two ways you can respond—you can lean in and share all the details, betraying a confidence.

Or you can be like Jonathan. He spoke kindly about David to Saul and warned his friend of the coming danger. He loved his friend more than himself.

Lord, help me to be a faithful friend when I’m tested. Like Jonathan, let me be loyal and speak well of my friends, even when they’re not around. In Jesus’ name, Amen. 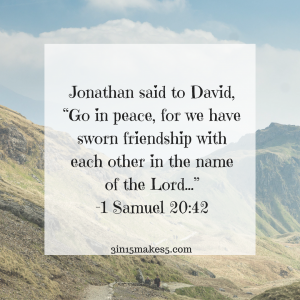