“Villagers in Israel would not fight; they held back until I, Deborah, arose, until I arose, a mother in Israel.” – Judges 5:7, NIV

Deborah was a judge in Israel. As a judge, she was a spiritual leader in Israel. One day, she called Barak and shared with him that what God had revealed to her. God commanded Barak to take an army and defeat the Canaanites, specifically the commander Sisera.

At this time in history, the Canaanites had been oppressing the land of Israel. The Israelites had tried to fight against them, but they were defeated and unable to reclaim their freedom.

So when Deborah issued the command to Barak, he didn’t want to carry it out. He proclaimed he would only go into battle if Deborah herself were willing to come with him.

“Certainly I will go with you,” said Deborah. “But because of the course you are taking, the honor will not be yours, for the Lord will deliver Sisera into the hands of a woman.” So Deborah went with Barak to Kedesh (Judges 4:9).

Deborah wasn’t just a prophetess. She was also a courageous patriot who fought for her nation. Her story illustrates that women can be fierce mothers even if they don’t have children of their own.

God, please give me courage in the middle of my battles. Let me remember Who I’m really fighting and honor You through it all. In Jesus’ name, Amen. 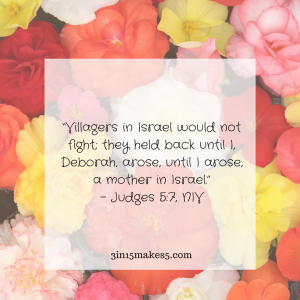